It was a mere 10 days ago that the Gold Coast put its hand up for the summer 2013/14 fishing crown….and its done it again.  Back in the water fresh with a new gearbox, Capt. Brett Alty’s Mistress was straight on the fish tagging 10 blacks. Thats 10 blacks with only 10 hours on the gearbox – well done Brett! 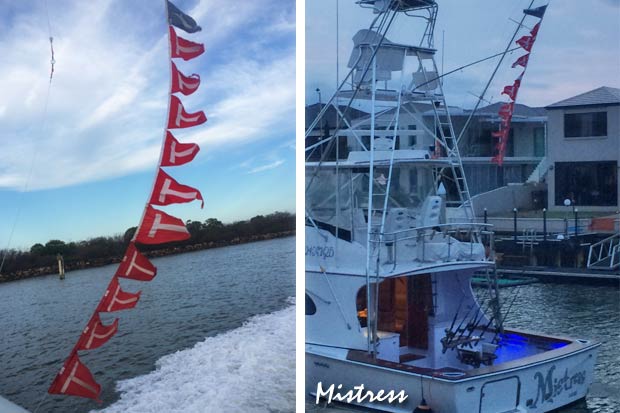 Gold Coast aside, eyes this weekend turn back to Port Stephens with the start of the NSW Interclub.  I had a quick catchup with Capt. Scotty Thorrington on Freedom who has been fishing solidly in the leadup.  Scotty says the water looks really good and its been a consistent 23.5-24 degrees with plenty of bait at the Carpark and plenty of fish around too – they just have not been biting as well as they could. Still most boats are getting a couple of bites every day and that could change overnight if it kicks into gear.

And maybe it has with a report from  Gary Ryan on board former Townsville boat, the 33 O’Brien Reel Diamond yesterday who went 3-2-2 on stripes.

Let us also hope that after Interpub 2013 when the weather gods thwarted three of the four days fishing (and the fourth for the small boat fleet as well) that 2014 brings better conditions.

If you have photos or reports to share from the inter club on the weekend, share on social media with the hashtag #interclub – lets get the hashtags working for us!

The NSWGFA are also hosting a Bluewater Expo this weekend, 3 days of fun filled action for all things fishing, the event kicks off Friday 12.00pm at Wests Diggers Shoal Bay RD with some huge lucky door prizes on offer including your chance to win a Raymarine Dragonfly Unit valued at $945!

The weather also put paid to much of the early season for boats on WA’s Midwest Coast (the Abrolhos Islands) but with if finally allowing a window over the weekend, it was time to test the waters.  Murray Olden report that all in all it was a good start. Combined they had 3 fish up resulting in 1 for 1 blue marlin on Innervisions of very good size (put it at 250kg+) in 2 days on the water. Wahoo and plenty of mackerel also around.

Jurien Bay is hosting the Marlin Cup this weekend so we look forward to hearing how it goes!

Thanks to Murray for the report.