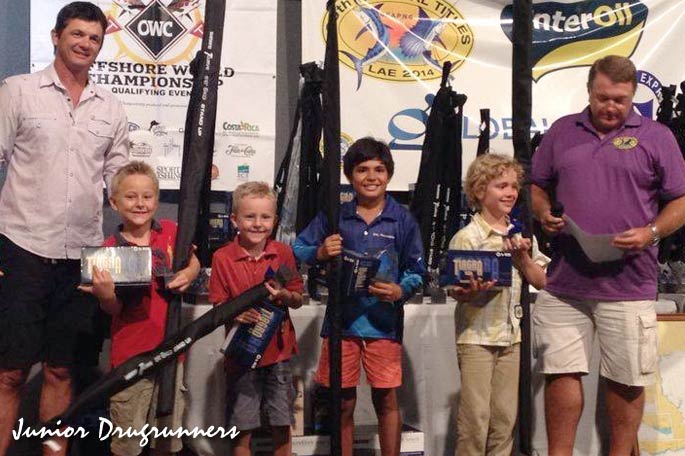 With 477 participants from all over PNG, Australia, New Zealand, South Africa, America competing on board 46 boats, this year’s PNG National Titles were hosted by the Lae Game Fishing Club. Each year the tournament moves location. Last year’s event was held out of Madang.

Overall there were more than 550 fish captured or tagged during the event including 47 billfish (blues, blacks and sailfish). Some of the notable captures included a 53.7kg yellowfin tuna for Patrick Seeto and a 155kg black marlin.

Overall I’m told that the junior anglers stole the show also taking out five of the adult trophy categories in addition to the junior ones. 11 year old Marcel Whitfield of team Junior Drug Runners was a standout. He tagged his first ever sailfish (on 8kg) and took out a bunch of categories (see the full results below). Just to clarify, the O’Brien built 47 Drugrunner is owned by the King family who are in the pharmaceutical business – hence the name!

I also heard from our own Capt. Laurie Wright (Australian Fishing Expeditions) who was just one of a very strong contingent of Aussie fishing personalities taking part in this year’s event. Laurie was driving the boat Satisfaction for the tournament, who accounted for many of the trophies themselves and credits the tournament committee for a very well organised event.

The full trophy list is here. Congratulations to all!

If you’re interested in finding out more about the titles, visit the PNG Game Fishing Association’s Titles page.

Thanks you to Lae GFC’s Helen Taylor for the results!