Just weeks after Leo Miller and his Team Choonachasa tagged the first sword ever tagged and released in Tasmanian waters, Darren Buttigieg followed up to satellite tag and release a daytime sword on Saturday! (Read on below for Leo’s story on his 4 Tassie swords caught since the end of April.)

Darren reports that Saturday’s swordfish was caught in 500m off Eaglehawk Neck after just shy of 2hrs fight on 37kg tackle and estimated at close to 200kg (photo at top).

The crew (Darren, Damien, Mat and Lochy) had taken Damien Chetcuti’s boat down there from the mainland and on this trip we spent 2 days out there fishing for swords. The fish was caught on Day 2. Darren said it first took a tuna belly flap that he had stitched but let it go to take the other bait (squid) at about 500m down in 550m of water. The fight time was just under 2 hours.

Darren admits that it was a very very hard decision for all on board to release their first, but with IMAS’s Sean Tracey (Institute for Marine and Antarctic Studies) just 3km’s away with a satellite tag ready to go, it was a great opportunity. The tag is programmed to pop off after 6 months and we can’t wait to find out what they learn!

And this as news comes in of yet another weighed off St. Helens Saturday at 238kg.

Although it had been on his radar for a while (effectively since Mure’s Fishing had caught their estimated 400kg sword years ago, and since Kenny Smith’s 224kg beauty last March), it got serious. And after much research Leo stopped talking and started specifically targeting the swords. By this stage they’d already recorded 2 night trips for no bites as well 3 day trips, busting one off on the 2nd, with the 3rd delivering a 90kg mako instead. All the while suspected swords were being hooked on electric reels by ‘accident’ and another member of the team Simon Turner had successfully landed an 83kg one on his boat Mr Sickles.

But on April 21, it all came together.

Easter Monday at 7:30am the team was just over the shelf east of Eaglehawk Neck and dropping a specifically pre-rigged and stitched striped tuna bait with squid skirt attached to 37kg mono.

By 11.30 there had been no action so Leo dropped a second sword rig (not GFAA compliant but the thin braid would cut thru the water easier with the wind picking up). Once the second rig was down Leo retrieved the other as it had now risen a long way up.

At noon the electric loaded up and retrieval began. The sword rig had drifted up to around 450m when Leo started retrieving and realised he’d hooked up! For the next hour they stripped and retrieved the line to the mono three times before the fish ‘woke up’ making a huge run with big tail beats pulling off 400m of line.  For yet another hour, in what had become 20+ knots NE into 3m SW swell, the fish couldn’t be moved.

After almost 3 hours on the rod, Leo recognised it was now or never and increased his thumb pressure and pump rate, and meter by meter the fish came to the boat. Finally, after 3 hrs and 30 mins it was alongside –  Tassie’s 1st ever specifically targeted broadbill swordfish on rod and reel which was later weighed in at 141.70kg. 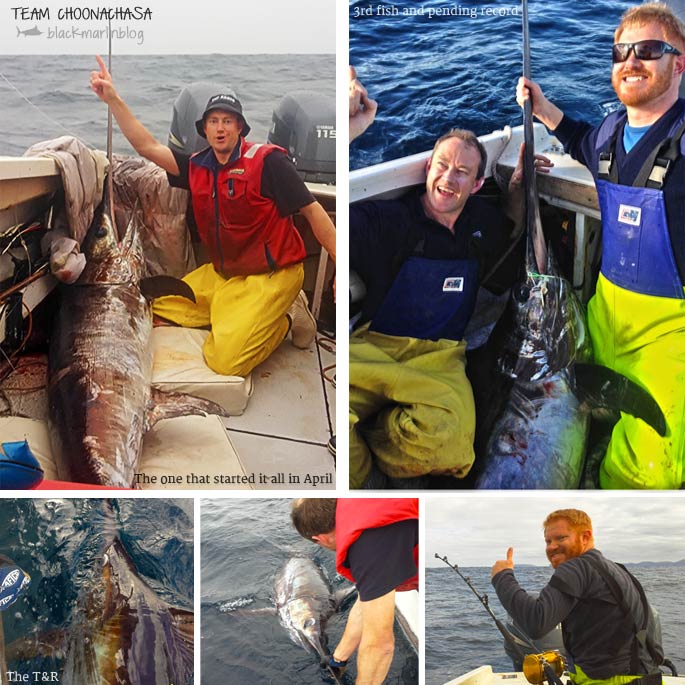 The Release! The most recent fish T&R on June 15

The biggest so far, this one was Simon Turner’s turn on the rod and the decision had been made to release this one regardless of size.  Hooked up within 10 mins of the rig hitting the bottom (500m), within another 5 mins the fish was jumping on the surface in the distance! (Check out the video of this fish here.) All up it took 2 hrs to get her to the boat (like marlin, the big fish are female). Leo traced the fish, removed the hook and they swam her alongside for 10 mins to fully revive her before release as she coloured back to an iridescent purple. They were also able to monitor her go down on the sounder!

She measured total length of 3.1m and girth of 1.6m. Using the experience gained by the 3 landed so far and online calculators they estimated the weight at 170kg which would have surpassed the previous pending record!

Team Choonachasa will feature in the June edition of Bluewater magazine and the September edition of Modern Fishing. In the meantime you can follow their adventures via social media below!