Coffs Harbour’s Solitary Islands Game Fishing Club’s new season kicked off a week and a half back, and while nine boats could only find some yellowfin and one striped marlin (to Dean Szabo on Alcatraz), the stripes turned up big time yesterday. 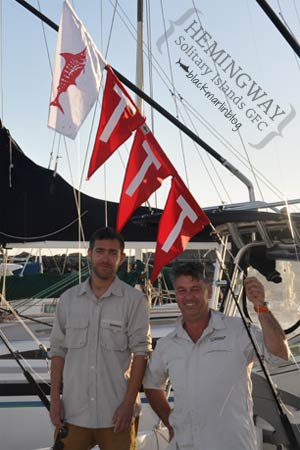 On Hemingway, Marcus Blackwell and his nephew George raised nine fish, tagging three, including a double header. Marcus put two of the fish at over the 100 kilo mark, including one that dogged it for two hours on 15 kilo.

They had free-swimmers, bait balls, birds, dolphins, the whole-shebang in 50 fathoms about where the FAD should be, and was deemed the perfect way to christen the new boat!

Thank you James for the report!

The run of yellowfin continued this week to for Gold Coast boats heading out in search of blues. But the blues are there too with Capt. Ross McCubbin on Reel Busy reporting a 150 kg blue marlin yesterday.  Ross says that they encountered heaps of yellowfin and big striped tuna busting all day. They also caught a double hookup of 20 kg dolphin fish. He’s predicting another good year on blues on the Goldy this year too!