Yorkey Knob FC held their annual Light Tackle Slam over the weekend (which was originally postponed due to weather, results still to come). Although Saturday was a quieter day, it seemed like there was a bit more action yesterday with the weather better than forecast as well which is always a bonus!

Overall though it seems like the juvenile black marlin have now headed south well and truly.  Ross Martin told me of some action in the Whitsundays – Ash Warland went 1 from 4 with another 1 from 2 with a few free jumpers around – and I also saw Johnny Mitchell got 6 solo off Gladstone (1770).  Look out SEQ!

On the heavy tackle side, reports have been few and far between.  On the Ribbon Reefs up the top, I heard that Capt. Corey Hard’s Askari found fish on Number 10 Ribbon Reef releasing three smaller models in straight line down from the top (no doubt a full trip report to come from Corey when he returns to port). I also hear there’s plenty of fish being marked so it’s just a matter of time until they start biting. 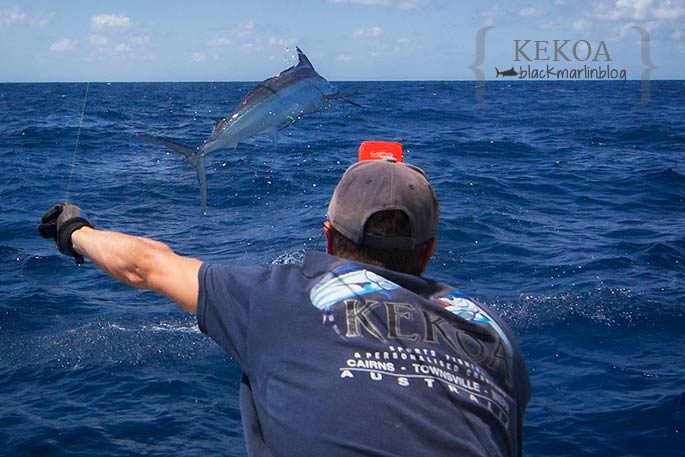 Down off Cairns, on KEKOA we enticed one from two at the Light yesterday releasing this energetic model for Andre on the bait rod which gave him a tough fight – we couldn’t believe the braid held in there!

Several reports from sailfish encounters off Weipa over the weekend and just in time for this coming weekend’s Billfish tournament.  And when you’ve moved from Townsville to Weipa for work, you’ve just moved from one light tackle playground to anther. Ex-Townsville angler Chris “Davo” Davidson and partner Marnie went 7-6-3 on sails out of Davo’s barra boat on Saturday. Davo said they saw around 20 fish all up and it was action stations from the outset with a pod of around 8 fish up just after lines in.

And a Weipa local keeping fishing in the family, Kristy Philliskirk’s Mofo (Kristy is daughter of well known local Alan “Fish” Philliskirk) treated two billfish novices to their first fish each with a 6-5-4 on sails yesterday as well!  Hopefully some more reports and photos from Weipa to come!