It was another big day for giant black marlin on the Great Barrier Reef with the middle to upper Ribbons producing once again.

Capt. Daniel Carlson’s Little Audrey and Capt. Tim Richardson’s Tradition each found the fish.  Daniel released 5 from 5 ranging up to 550lbs and had a couple of bigger girls up as well.  Capt. Tim enjoyed the first day with long time regular angler Greg Seel starting off with a bang and missing a nice mid ranger early and then following up with 4 from 7 whilst fishing Number 8 ribbon with only 2 other boats.  Tim says while there was nothing big, they were some fun smaller fish, all greedy little pigs, all eating big giant baits all day.

Up on Number 10, the big blue Kiwi boat Ultimate Lady got onto their first real nice one of the season and I snapped the shot (at top) of it on the leader at the end.  Capt. Tom Francis put it at a good 900 and tells me they also raised another decent fish at the end but it just missed the bait a few times. 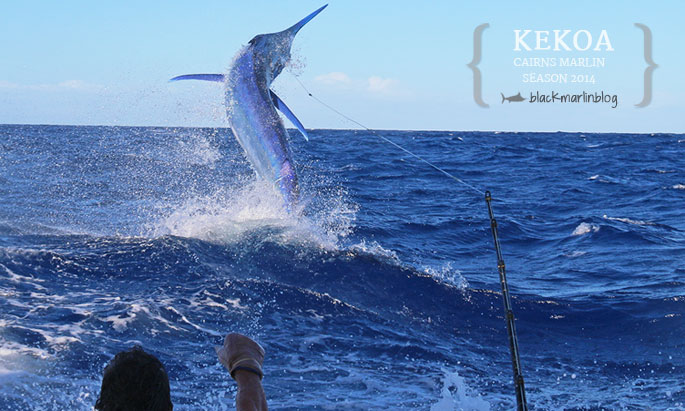 Nearby on KEKOA with Capt. Luke Fallon we put Jada onto three fish for the day with a couple of energetic rats and this big beauty that Capt. Luke also put at 900lbs – all lit up throughout the fight.  And Capt. Jared Weir’s Shaka also released a nice one that he put at 900lbs+.

I’m not sure how they ended up but I saw Capt. Russell Caporn’s Kaizen catch at least two including this one on Number 10 Ribbon as well.

While a little further down the track, Capt. Tim Dean on Calypso saw several for a right bite late with another 900lb-er. Good fishing!

And last but certainly not least, Capt. Bobby Jones’ Iceman returned to port for changeover last night after a great trip with Joe Assenza and company from the USA.  They ended with 11 fish for the trip with some real nice ones including a 500, 700, 950 and finished off yesterday with a 900lb-er for female angler Jess Nuffer (who also caught the the bigger one as well!) Go Jess!