Luke caught up with Capt. Bill Billson on Viking II yesterday, who has been getting a bite a day or so over the past few days. But he topped all that yesterday with a great day on the water releasing three fish, including two big ones, and one of those at the death, just before lines in after an already good day on the water.

On KEKOA, Capt. Luke put us onto a big fish for owner Scotty Taylor that he put at 950lbs (pic above) before lunch just near the mark where he caught one about the same size a couple of seasons ago, and we missed a few bites from (very) small fish as well. And Capt. Corey Hard on Askari did the same thing for his novice angler at the end of the day putting him onto a fish that Corey put at a healthy 900lbs+ just before lines in.  Corey said it was angler Hugo’s first time in the chair and his previous biggest fish ever was the yellowfin tuna which was the bait which he caught earlier in the day!

Capt. Steve Ahlers on Hellraiser also had a good day going two from three, with the successful two from a double header at 450 and 700lbs!  Steve tells me they also went 1 from 2 at 300lbs the day before for his anglers from Arizona. 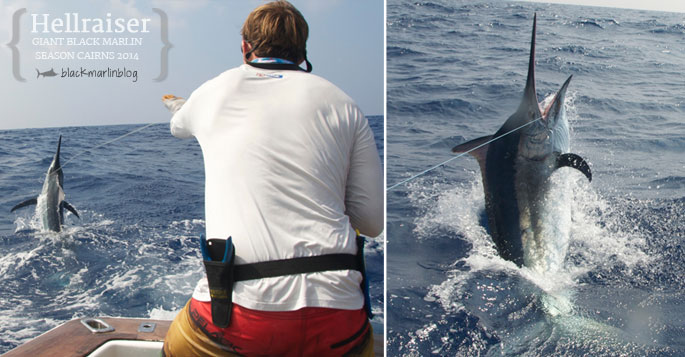 And some more from Fraser, this one from Luke Hands who said that he and some mates took a 3m tinny up to the island on the roofracks and had a great time out in Platypus Bay on the little blacks. Luke said that had well over 20 strikes, and 6 up to the boat and released. But this one gave them a bit of a fright when it almost came on board!