Exmouth’s Heavy Tackle Tournament was held last week in less than ideal conditions (having already been postponed once due to weather!) As for the fishing, Eddy Lawler’s Peak Sportfishing once again showed off the fishery to its very best fishing both during the tournament and the days either side, and in the comp, taking out both the Champion Team and Most Tags awards.

Eddy tells me that although the wind has created a challenge over the last week or so, in their last five trips they have recorded 16-16-14 blue marlin, 7-6-3 striped marlin and 3-2-2 black marlin.  That’s 19 all up in the last 5 trips (5 days!) That’s crazy good fishing!

During the tournament they tagged 4 marlin (3 blues and a black).

Update: Fishing yesterday they added another 1 from 1 on a half day (guests a bit under the weather due to conditions!)

A little quieter due to conditions but Capt. Craig “Sparra” Denham, continuing his journey returning the Iona home south, released a black he put at 250lbs off the Noosa Canyons yesterday.

Only a week late in reporting the first marlin for the Gunrunner team off Port last weekend. Scott says that they tagged 1 from 3 stripes a little north of the carpark and that the bait was plentiful and the water up and down -starting with 23 and went up to 25.3 and later cooling back down again.  He also reports that Curly III went 1 from 3 also and a Newcastle boat had a double header on blues, tagging 1 and later capturing a 20kg mahi so a bit of action there. They are back out again from this weekend so we look forward to hearing more!

(Update, the other Newcastle boat was Spaniardo 2 and Ryan tells me that they also got a nice stripe 2 weeks before that as well!)

Meanwhile Bruce Rayment tells me that PHGFC boat Avalon fished wide of Port Hacking on Sunday tagging a black marlin with a 2.3m short length (estimated at 120kg for skipper Bruce himself on 15kg tackle – photo below – marlin selfies!) With Mike Spitzer on the controls, trace and tag pole this was the first of the season for the boat.  Bruce also tells me that a number of other boats were fishing a temperature break east of the Port Hacking FAD on the edge of the shelf with this not the only fish tagged on the day with Botany Bay GFC boat Hothead tagging 2 marlin and Madness tagging 1. 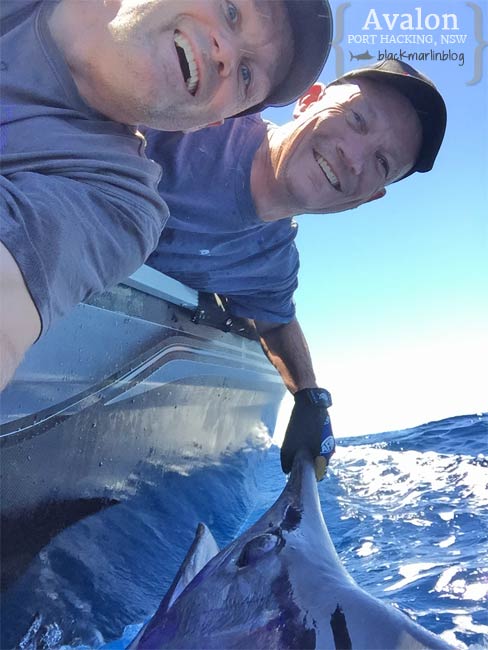