Gold Coast still blue, NSW not forgotten and Exmouth tourney season off to a great start

And a couple of big fish encounters among the smaller fish. Glanville, on board his Ocean Instinct (and fresh back from a Cairns marlin season where he spent time on board Viking II with Capt. Bill Billson) encountered a fish that he put well over the 800lb mark yesterday. Encountered is probably the wrong word though..read on!

As Glanville puts it, a dream nearly came true yesterday with this blue marlin that he says blew any fish he’s ever seen off the GC out the water. Unfortunately they just couldn’t budge the fish, which didn’t even know it was hooked for first 15mins (with 14kg of drag) and then proceeded to put on an aerial display of greyhounding jumping which gave them a good look from every angle only 30m away from the boat. The fish then proceeded to nearly empty an 80w whilst being was chased down. They managed to get the line back, slogging it out in the deep but eventually pulled the hooks.  As Glanville says, it was an absolute beast, a once-in-a-lifetime fish. “But it’s not a 1000 if it’s not on the scale but that was him!”

He ended the day with another great 3 from 8 (blues).

Seems like a few more around with Capt. Ross McCubbin’s Lucky Strike also accounting for another fish to put him on 116 fish for the season (with Ross also reporting an amazing 21 bites just in his last three days of fishing!)  Ross says that Towcam’s John Faulkner’s Four Star  went 3 from 5 and I also saw that Lochlan Saville’s Watchtower went 10-5-3 while Gavin on Sea Probe reported a nice blue one for his guests as well. 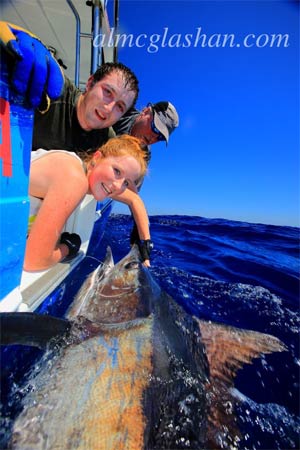 Al McGlashan has sent me some more great pics from action off Sydney. They caught a solid solid spearfish (that measure out 1.76) in just 75 fathoms off Sydney on Sunday then on Mondaybacked it up with this solid black which was a first for marlin virgin Patty (another visiting ‘yank’ as Al likes to put it ;-) )

Catch up videos from the south coast here (close encounter with a marlin) and here (crazy bait bail action).

According to Exmouth GFC, the Marlin Blast – which is marlin specific pre-cursor to Gamex which starts this weekend – is off to a solid start. 58 marlin were tagged on Day 1 with Rockall taking the lead on 8 tags.  The Marlin Blast is a 3 day tag and release only billfish event whereas Gamex that also features a range of capture sections as well as other gamefish species.

Just in case you don’t remember (how could you not!), I’d like to remind you that Gamex in 2014 averaged 100 billfish a day (a day!)  Here’s a bit more about the whole Gamex experience in case you are thinking about it for 2016 like me.

I’m sure looking forward to hearing how it fishes this year!