The Gold Coast boats are out every opportunity at the moment, as you certainly would be too, when the weather allows. So it was another day out for those who have a flexible work week (or those of us lucky enough to fish for a living!:-) ) 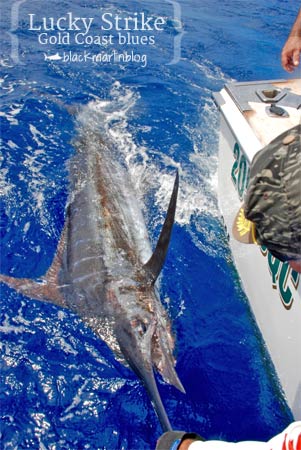 Capt. Ross McCubbin put three marlin ‘virgins’ onto a blue marlin-a-peice yesterday on board Lucky Strike going 3 from 7. He’s back out there again today to do the repeat! Ross also tells me that David Green’s Gemma also released 3 from 4 including double with just the 2 on board, while Capt. Simon Carosi on Assegai also went 3 from 4.  I also heard that Ramjet went 5-5-2 and Ocean Instinct got one as well.

Picture on right of one of Lucky Strike’s fish. As Ross said, you can see the longline hook in corner of the mouth. He’s encountered a fair with them and that is nice to see long-liners releasing them healthy.

Thank you to George Lirantzis for the results below and who tells me that 34 boats with approximately 160 anglers competed in the tournament.

The club also wanted to congratulate all juniors and small fry anglers who fished the tournament — in particular Jake and Zac Watson on board Mayhem and Krew Hitchcock on board Teaser. And also congratulations to Blue Alibi for taking out the Saturday Cash Shoot Out.

I also had an email from Andrew Homann who gave some pretty big kudos to the club for the event! Andrew said that although Day 3 was cancelled due to the blistering southerly that hit the East Coast (and also blew out the BBGFC Day 2) what he thought was worth a mention was the way the tournament was run and the amount of prizes and also the value of prizes that were up for grabs.

For Andrew it was like a tournament that was run in the late 90’s/early 2000 with the prize money and raffle on Saturday night that Andrew said featured more prizes than your average comp alone would have (all up over 17k was raffled away). Andrew reports “The new club President George Lirantzis and his committee have really taken this comp to a new level, on top of this the fishing down there can be pretty hot and also the edge is within 16 miles of the port, most boats got a few shots a day with a mixture of blacks and stripes and a few descent blues were lost by the couple of the boats fishing for them.”