The Shimano Port Hacking 100 was held over the weekend with 61 teams competing. And although the weather kept the small boats in Port on Day 1, it more than made up for it on Day 2. Scroll all the way down for the official results but first, an event round-up as well as a first-hand account from the winners of the 50K prize winning heaviest fish!

With a brand format and new head sponsor the event was always going to be hotly contested as the crews vied for 20 prize categories for individuals and teams and everyone had their eye on the Jackpot Prize of $50,000 cash for Heaviest Blue Marlin over 180kg.

Day one saw some stiff conditions with a solid southerly blowing 20+ knots though the majority of the fleet braved the conditions and headed wide to find Mr Big. Fishing started slowly with an early report of PHGFC vessel The Outlaw taking two nice yellowfin tuna to get the first points on the board. And the tuna bite continued on the following skeds for the vessels out wide. Late in the day after a few missed fish reported, SGFC vessel Gale Force came across the radio to confirm a hook up, which was reported captured after a 2 hour fight! The winning fish (more below!)

Day two saw almost perfect conditions with the wind abating all vessels were able to leave port and again contest all categories. With Gale Force already having one hand on the winners cheque, crews were determined to knock them off and claim the prize for themselves. But as the call for stop fishing came through at 4pm, no other blue marlin were brought in to weigh. Botany Bay vessel Maddness recorded two blue marlin to take out Champion Boat T&R including one to Champion Lady Angler (T&R) Cara Hammond and the other to Joe Xerri.  The capture side saw LMGFC vessel Vengeance win with two large sharks.

We would like to thank all competitors and of course our great sponsors and look forward to next years event in May 2016.

Thanks so VP David Joyce for the great recap! And… 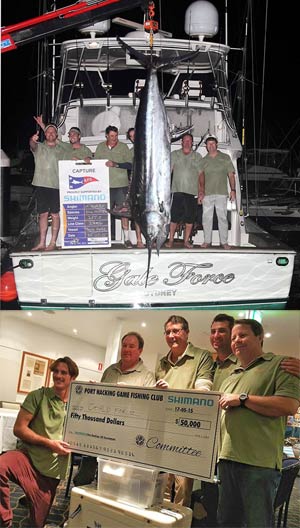 “The marlin took the shotgun lure around late on Saturday afternoon. The first run nearly spooled us and the large marlin did the classic blue marlin thing tearing up the ocean in the distance. Dad (Michael) was on the rod and did well to regain the lost line quickly as we backed down sea at the fish. We had the double on the rod tip after 40min but spent the next 40min into a setting sun before Daniel eventually took the trace and had a really good look at the fish for the first time. The second the call was made to take the fish 3 gaffs were sunk perfectly. To say we were happy was an understatement and the cheering carried on the whole trip In.
The weigh station was very formal affair with all the officials, observers and gear checks and of-course the official weighing. There was so many people on pontoon and surrounding shore line at one stage that we thought the pontoon was going to sink. A late night and nervous wait the next day including a few late hook ups had us all on edge until the every end.
We would like to thank the Port Hacking Game Fishing Club and the excellent tournament committee for a great weekend. Gale Force and crew love fishing this competition!“