So a week after the Sunshine Coast gave the Gold Coast a run for the annual top club boat crown (and won!), the same players are at it again this time giving North Queensland a nudge for the winter juvenile black marlin crown. While our juvies in NQ at this time of year are larger models, some of the fish the team on Chaos were encountering again yesterday on their return journey from Fraser to the Sunshine Coast, were sub-10kg.  This particular model below was measured at 750mm and estimated at about 2kg!! 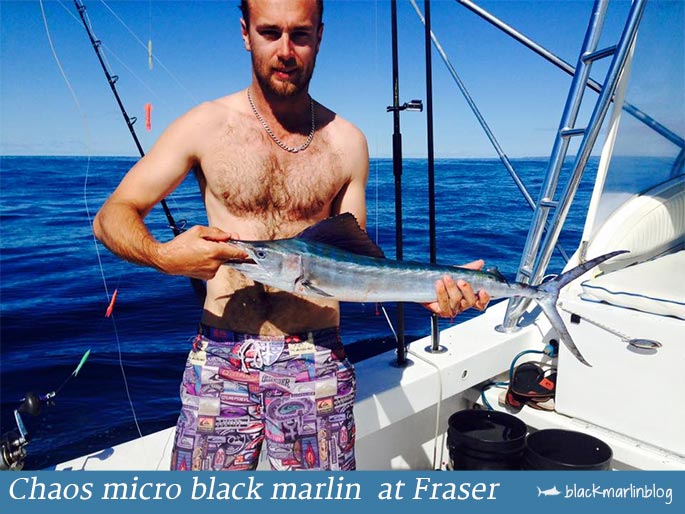 The fish was measured, photographed and tagged for Sam Williams. And I saw that Dr. Fish (Julian Pepperell) has estimated this guy at around 3 months old which supports the later/separate spawning theory, because the main season GBR fish should be several months older than that by now.

Jay Graham reports that they caught a total of 6 from 8 that switched yesterday, 3 of which he put at 10kg+ plus the little fellas. They also raised another 6 that didn’t switch properly, got tangled in daisy chain in their eagerness or rejected live bait etc.  And 5 were caught on on 4kg and 1 on 6kg.  And then they went reef fishing. Sounds terrible doesn’t it! ;-) 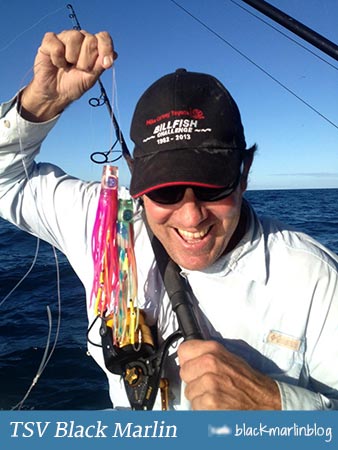 And after hearing that, it was quite timely to receive a report from Mick Winterton fishing off Townsville yesterday on September Blue, with the weather finally giving us a break up here.  Mick reports he went 2 from 5 (5-3-2) on the little blacks he estimated at up to 15kg on the northern grounds, all on lures.

A few more boats are fishing off Cairns over the next few days too so we look forward to hearing what they find up here!