The Weipa Billfish Tournament is less than two weeks away and the fishing seems to be ramping up just in time.  Ben “Notso” Bright tells me that for most, ‘days off’ can’t come quick enough to put them back on the water.  Ben says that pretty much every boat is catching daily at the moment with the best tagging 5 in a day. The black marlin are ranging from 8kg and up in all year classes and a few sails around as well.

One who encountered a bigger year class of fish (x2) over the weekend was Rhys Moore fishing in his Key West.  Rhys tells me that over the two afternoons they caught 2 black marlin – one was caught with a live (baby) GT pitched to it while free swimming which was awesome to watch – which he put at around 100kg.  The second was also a bigger fish that he estimated at around110kg.

In addition to the marlin they also caught 3 sails and missed a couple of opportunities with the fly rod as well.

Some great photos above and below thanks Rhys!

Nathan Green sent me the pic below and report of a juvenile black off Yeppoon Thursday onboard Pelagic for angler Adrian Osborne. Nathan reports that fishing has been slow lately with not a lot of bait around. Which of course was the same problem we had in Townsville this year.  But there are still a few around in the north and making their way south with Capt. Tim Richardson on Tradition reporting two tags north of Townsville and off Cairns on his way north for the season.

As for the big marlin, reports are few but there are a few being caught in the upper Ribbons. More boats  start fishing over the next week so I’m sure more reports will file in with more regularity soon! 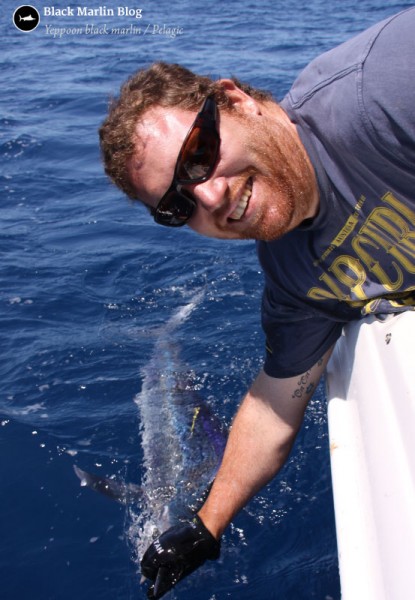