More numbers on the reef

Updated: Report just in after last week’s trip with the juniors on the 50lb, Askari started its real heavy tackle season on Saturday. They went 6 from 8 on Saturday with a 950lb and 850lb (with the rest from 300 to 450lb’s) – the 950 was for a first time angler (first marlin). Then on Sunday went 1 from 4 with a psyco 450lbr. The conditions are quite ‘fresh’ at the moment but Corey said the new Seakeeper is working an absolute treat!

Also I just heard from Rick Benitez who is fresh back from another week with Capt. Robb Finlayson on Top Shot.  Rick says they caught 9 from 12 bites in 5 days of fishing. They got one on the mark on Friday and Sundau caught 5 out of 6 including losing a fish on the hook that broke after about three minutes on her that was another ‘950’!  Rick’s had some awesome trips on the reef over the years. I’ll try and find some links for you tomorrow!

Also very good, the fishing on the reef. Although you still have to be in there right spot, but if you are…

I’m running about a day behind in the reports (its taking that long for them to come in) but a great day on Saturday for Capt. Haydon Bell’s Kanahoee.

Heading south from the top to move closer to Cooktown for changeover, he caught 5 from 6 on Saturday to 500lbs. Haydon said that one of the fish had tag in it about 130lbs so it will be interesting to see where it’s come from. They caught a few more over the 5 day trip including a big one at 950lbs.

Also on Saturday, Capt. Bill Billson’s Viking II recorded 4 from 6, while Capt. Timmy Dean’s Calypso also released three.  Capt. Tom Francis’ Ultimate Lady found two up on Day Reef, while on KEKOA with Capt. Luke Fallon, we also released one in the middle before heading in on changeover.

And a catch up report from Capt. Darren “Biggles” Haydon on Bounty Hunter who  finished a 6 day trip with 8 fish including an 800lb-er, 500lb-er and the rest small ones. Biggs said they also fought a real nice one for two hours before unfortunately breaking the leader.

And another catch up report from Myrmidon. Marlene Hicks tells me that she released a 120b black marlin on Topless as angler and husband Russell Hicks got a 20kg sail leadered by Marlene on Thursday. (pic top) 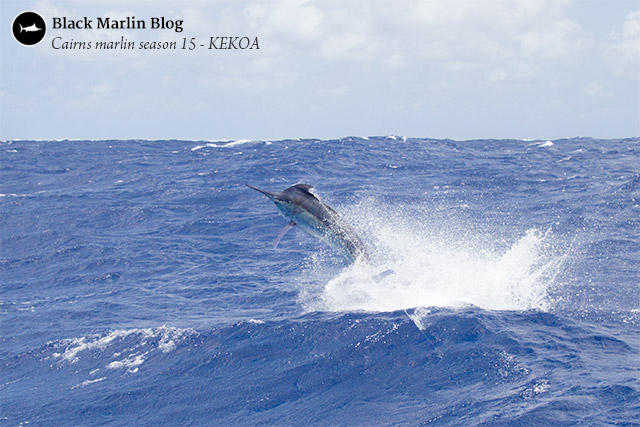