Another slow day of fishing in the Lizard Island Black Marlin Classic with our leaders keeping quiet on leaderboard, other boats are creeping closer. Also a couple of first fish for the tournament as well as a couple of bigger fish as well.

Capt. Chris “Sharky” Miles’ Levante started scoring with a fish just before 1pm at 550lbs for Stuart.  They followed up with a second just on 5pm which will give them the daily.

The Eggins family’s Athaldo got on the board with a 150lb-er to Josh as did Capt. Dean Beech’s Onsite with a 200lb-er for Jake. Sue Ahlers with hubby Capt. Steve on Hellraiser also added to her tournament tally albeit with a smaller fish than she is used to that Steve put at 50lbs!

While a few fish were lost, including one for Top Shot that was fought for over 40 mins and Wild Turkey likewise for over an hour, there was another big fish reported with an estimate 850lber for angler Andrew Stubbs on PHGFC’s The Outlaw. Fellow PHGFC’s Just Chill ended the day with another fish at 300lbs for Will. Photo of Just Chill’s fish from the day before at 850lbs taken by Josh Plush at top.

The current standings are:
Iceman still leads on 8 tags clear. Second is Reel Easy on countback to Askari and Tsukiji each on 6 tags.  Think Big is in fifth on 5 tags on countback to Cookie.  4 tags each for Assegai, Top Shot and Levante. KEKOA,  Hellraiser and Just Chill are on three. On two tags are Entourage, Hot Shot, Amokura and The Outlaw. And one each goes to Wild Turkey, Kalira, Topless, Zulu, Reel Shock, Duyfken, Burgendy Lady, Fascination, Kaizen, Viking II, Athaldo and Onsite.

Outside the comp, some boats are faring a bit better. Rod Hawkin’s C’Mon Aussie, with Capt. Jared Weir at the wheel and Braden Byrne on the deck are four from four in three days fishing so far on the latest trip to 250lbs.

Also a report from the Grander team on the Bartlett family’s Black Magic  who also enjoyed the good weather out on Wednesday.  Tom tells me that the fished the Bank in perfect conditions and went 2-2-2 for a late bite catching both fish between 4 and 4.30. Tom says the Bank looks alive with bait and birds everyone with constant bite offs from big wahoo and huge Spanish mackerel and that they managed to land one Spaniard around 40kg. 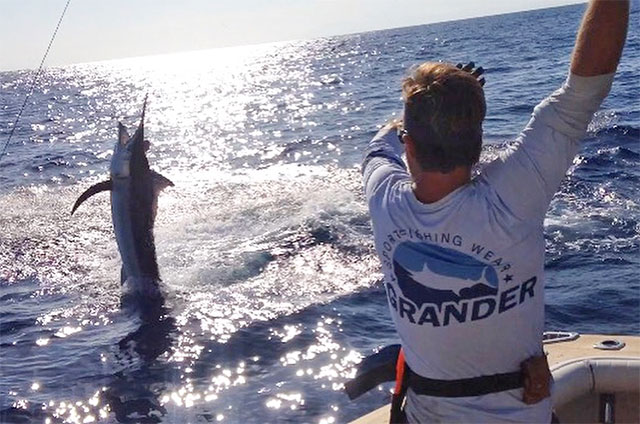