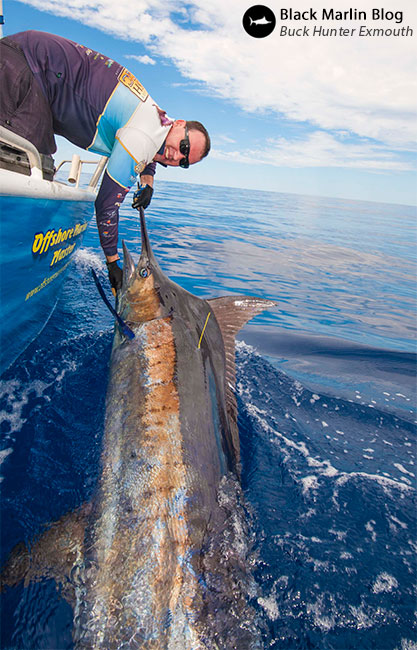 Ben Knaggs fishing solo on is 5.5m trailerboat Buck Hunter had one of those days chasing blues wide of Exmouth where everything went his way! After a sunrise start, Ben had two blues to the boat and released not long after 7am in amazing glass calm conditions.

The next couple of hours were quiet before all hell broke loose and Ben was on a double of blues with only one set of hands available to deal with them!

In need of help, Ben called the crew on Freeballz who were fishing close by and able to offload Murray Pattinson and Haley Dellar to jump on the wheel and leader the two fish for a successful semi-solo double. Leigh Freestone was also able to get some great pics of all the fun.

More than a bit exhausted in the windless, hot conditions, Ben hadn’t even finished re-setting the spread before another, larger blue nailed the lure on the short ‘rigger and Ben was tied up in knots doing the solo thing again! This fish was a real dog, crash diving deep and refusing to come up within leader range so it was with some relief that Ben was able to grab the leader and bully it boatside some 40 minutes later to be 5-5-5 for the morning. With all this action happening before lunchtime, Ben was able to repay the marlin gods by heading in to help a boat needing a tow back to the ramp to finish off a memorable day.

Leigh Freestone, Hayley Dellar and the rest of the crew aboard Freeballz were back out there again yesterday tagging their first blue of the day by 7:30am so the fish are still on. The blues are on and the current is pumping off Exmouth at the moment, so things are looking good for the Exmouth Game Fishing Club’s Heavy Tackle Tournament starting Friday!

The season is not over yet with the O’Brien family’s latest from the O’Brien Boats’ stable OB1 (38 footer) spending another successful weekend at Myrmidon Reef and surrounds. Leigh reports going 2 from 4 including one at 500 lb wide of Myrmidon on a lure and the other a 650 lb fish out of a double header in on the edge (photo). 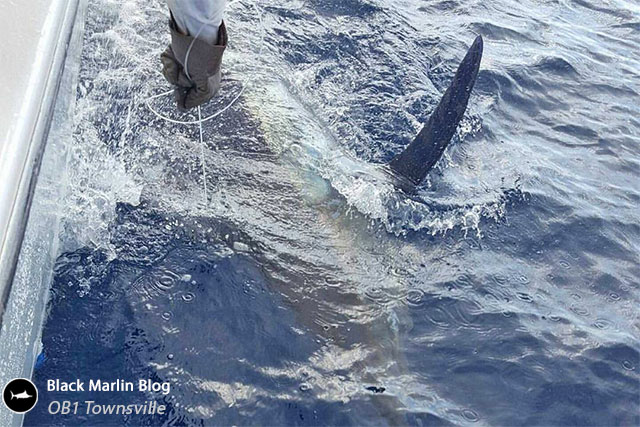