While everyone in Weipa had thought that the sailfish season was over, a few die hard Weipa Billfish Club members persevered over the past week in the hope that there may be the odd fish still about.

In the past couple of months, a few black marlin have been caught but the sails had all but vanished. That was until Duane and Linda Jay on club boat Get n Any went wide of the southern FAD on Wednesday and found them in good numbers. They managed to tag two that afternoon and raised and lost a few more. They were back out the next day and caught what is believed to be the first Wahoo to be caught in Weipa! They also came across a massive workup of frigates where the sails were balling up the bait on the surface. They managed to tag four that day and again had numerous fish in the spread and dropped a few more.

Duane and Linda were met at the ramp on their return and the news spread quickly.

The next day the crew aboard club boat Wine Down, Darryl, Steffan and Ben French were out there amongst it. Darryl says the frigate numbers had to be seen to be believed and they were swooping on the small flying fish the sails and tuna were putting up. For two hours they raised numerous pods of sails and had double and at one point triple hook-ups. Wine Downs day ended with 9-8-6.

Back ou the next day on Wine Down Darryl this time with Simone French, likewise another other club boat  Small Fry skippered by Tegan Witcher. Although not there in the numbers of the day before Wine Down managed to go 5-5-4 with pods of fish being raised once again.   Darryl said it will be a special memory for him to be hooked up and fighting a double header and still have sailfish swimming around the back of the boat looking for something to eat!

While mostly the fish have departed, there are still spoils to be had around the reef and out wide. On the 4 day light tackle trip Capt. Darren “Biggles” Haydon’s Bounty Hunter released two sails among other gamefish species.

And Graham Johnston’s Broadbill also headed wide to the seamount and beyond with Bluewater GFC’s Mal Henderson on board. Mal says he fished with Alex a Graham Johnston, and their friend Clive north east of the local sea mount for a good variety of game fish as well as 2 black marlin in the 100kg range (both released before 6:30am on day 2!) They also got into some yellowfins including 2 smaller rats a 15 & 20kg, with 2x jumbo versions at 70kg (weighed on board) and an estimated 60kg yellowfin the next morning, which was released. Out wide they also released a blue marlin about 450lbs which was a double hookup with the big tuna! 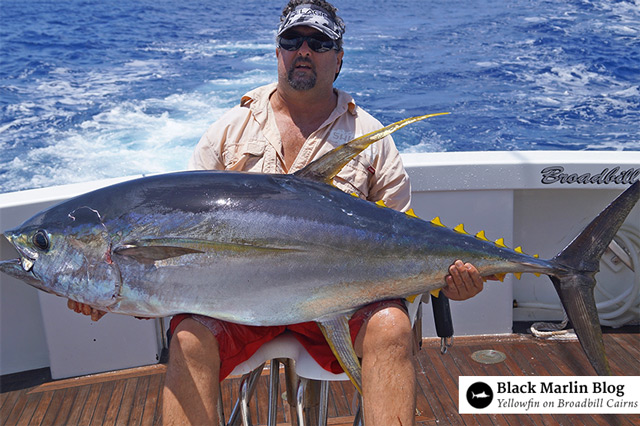