Without further ado and with big thanks to CCGFC Club President Nathan Bajada, a full tournament recap!

This year’s 2017 Central Coast Game Fishing Clubs Bluewater Classic was run over the 7th & 8th of January from the Gosford Sailing Club based in Brisbane Waters. Attracting major sponsors once again such as, Garmin Marine, Penn Fishing & Great Northern Brewing Co a total of 53 boats and 230 anglers entered making it a new record attendance for this tournament now into its 7th year.

With favourable weather conditions on both days and the fish spread out, the competition was fierce. Traveling boats from south of Sydney were fortunate to find good water, bait and a few fish holding up around the local FADS, this produced for the winning boat over 8m, Maddness from Botany Bay GFC picking up a couple early fish from this area. Further up the coast local boats found good bait on their northern inshore grounds off Terrigal. Whilst the bait was thick the fish were picky and only a lucky few managed to get the bite. One of these boats, again another visiting from Lake Macquarie GFC, Offshore managed to pick away at them in this area and gave Maddness a run for their money right to the end of fishing on the Sunday. In the end though it was Maddness who did enough to take the win for Tag & Release in the Over 8m category after tagging another marlin on 10kg and a few other game fish along the way.

In the Under 8m side of things, there were plenty of hits and misses. Local boat Finfisn and Killtank got off to an early start both tagging fish early on the first day, Killtank’s being the first tagged marlin of the point score season for CCGFC, pipping Finfisn at the post by a few minutes to claim first Marlin.

Meanwhile visiting boat Full Monty2 from Port Hacking GFC found a nice blue marlin on the shelf in the morning and then securing the win in the under 8m tag and release category with a black marlin on the last sked of the day. 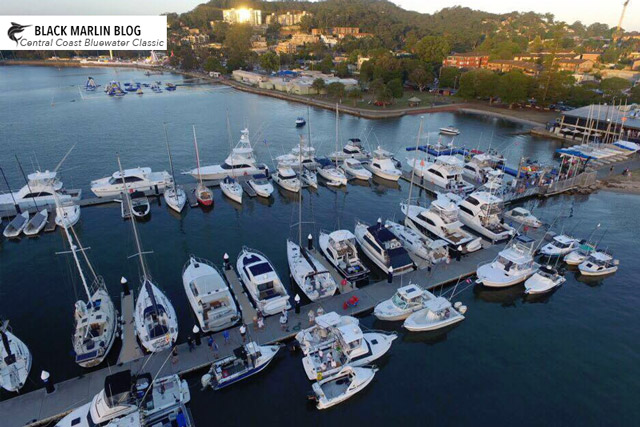 The Bluewater Classic generally sees the capture teams keeping the weigh station busy with XO size sharks and marlin to weigh, however this weekend the fish were considerably smaller with some noticeable specimens unfortunately lost boat side. Visiting boats from Broken Bay GFC were well represented over the weekend, with BBGFC president Jamie Ward on Carnage taking out Under 8m Capture with a tiger shark on Saturday and a nice mako on the Sunday. Also from Broken Bay GFC, well known capture boat Rampage did enough on the Saturday, also weighing a tiger shark to secure the win.

All in all everyone enjoyed a couple days of competitive fishing and the recently upgraded facilities from the home of the Central Coast GFC at the Gosford Sailing Club. The feedback from those that entered was all positive. The tournament had a fun, friendly atmosphere and the club looks forward to these teams returning next year to either defend their title or claim it back.

Final stats for the weekend were 22 marlin tagged, the majority of these being striped marlin with a couple blacks and a blue in the mix. 3 sharks weighed, 1 tagged, the usual swag of mahi mahi and a few Yellowtail Kingfish thrown into the mix. Congratulations to all the winners and to those that competed in the event.

Read on for the full results and winners by category!