The 65th Annual ‘Little Audrey’ Peter Goadby Memorial Tournament was run by Sydney Game Fishing Club over the weekend and what a tournament it was with the blues turning up in both size and number. After weeks of gale force winds and storm fronts the weather played ball and thirty-eight boats headed out on the opening day with an additional ten boats getting onboard to fish Central Zone. 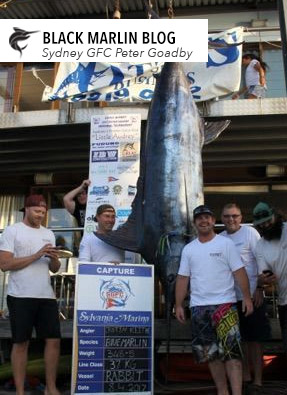 In the capture division Sharking captured a nice Mako Shark whilst both Maddness and Dealne had productive weekends bagging multiple blues. The tournament though, belonged to Port Hacking Game Fishing Club boat Rabbit, skippered by Greg Tasker, who took out Champion Boat Capture and the Heaviest Marlin category with a 348.5kg blue marlin on 37kg to take out back to back victories and the $25,000 cheque!

Sydney Game Fishing Club would like to thank all of the competitors for a great weekend and give a special thank you to all of the sponsors who supported and made the tournament possible, namely Little Audrey Charters, Furuno, IBW Constructions, Lewis Financial Management, Great Northern, Watson’s Bay Hotel and Sylvania Marina. We look forward to seeing you all next year.

Big thank you to Simon Fisher for the report!