Grander Cairns and firing at Fraser

Report in from Capt. Brett Goetze’s Amokura this morning notching up an outstanding day on the reef yesterday. Brett reports that the fishing has ramped up for them with 21 bites in the last 3 days!  Yesterday was the icing on the cake with them going 4 from 6, at 400,800,900 and 1032lb!!

Angler Stephan Kreupl from Germany has been chasing this fish for a long time having done 96 days in the last 8 years on the reef. He’s had many close encounters and long fights over these years with fish similar size and bigger but wasn’t able to covert.

Stephan who fishes all over, has weighed an Atlantic blue marlin at 1150lbs and a pacific blue marlin 1238Lb on 80lb tackle which still stands as world record.

Adding the grander black marlin makes him the only person in the world to have weighed all 3 over 1000lb as a angler which is a great achievement. Congratulations Stephan!

And below is a video from the Dreamin’ On team on Capt. Corey Hard’s Askari of one of the big fish they released this week.

Fishing 2-up on his Blackwatch Pole Dancer David “Tagpole” McMaster and Dale Penhall started off well with one from one on the light tackle blacks before converting 3 from 4 on the heavy tackle blues.

Peter Kendall fished on Hit n Run also at Fraser for the last two days with Brad Bobbermien, Peter, Lachlan Kendall an Hugo Brookman (both 14) on 130. They went 5 from 5 the first day and 1 from 3 yesterday made up of 5 blues 350 to 450 and 1 black around 250. Great fishing for the young lads! 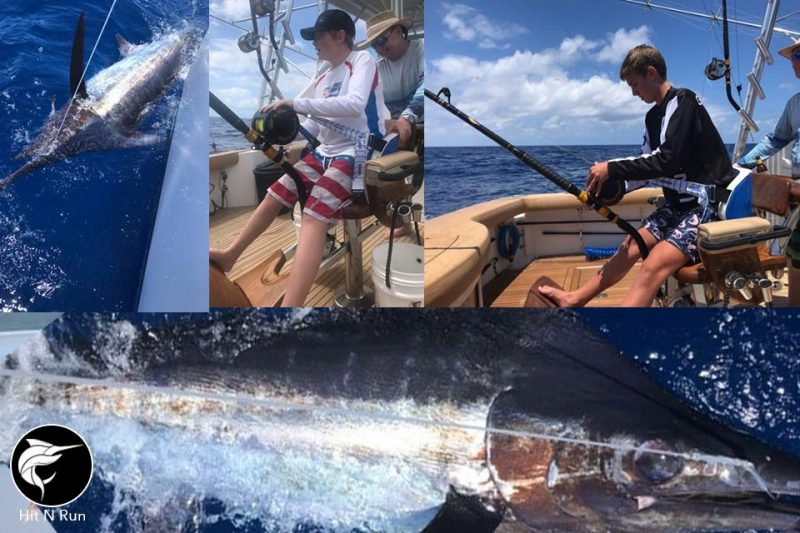