We had 26 boats enter the tournament which consisted of 85 anglers. There were 140 strikes, 108 hook ups and 70 fish which included 32 Blue marlin, 13 black marlin, 1 striped marlin, 11 mahi mahi, 1 wahoo, 4 yellowfin tuna & other species. 47 Billfish were tagged and 23 other species were tagged.

Photo from Matt Metcalfe of a blue on board Craft Catch at top!

Catch up report from Capt. Dan Bergamo on Wild Turkey who fished out wide over 4 days with Bluedog lures catching 7 from 15 up to 900lbs.

And Capt Jason Legg’s Black Ops went 2 from 3 and raised 2 more. One good mid ranger and the rest were smaller fish. (Photo below). 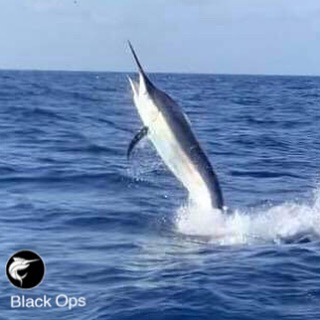