While slowed a little from the previous week the little black bite continued on the east side of Fraser Island over the past week. Capt. Jason Legg’s Black Ops spent a total of 3.5 days fishing Fraser on the return journey north to Cairns for 21 blacks, the best day being 10 from 13. (Update they put one more day in Sunday for a 5-4-4 before heading north!)

Luke and Kelly on Senshi also fished Saturday for a 5 from 9, number 5 notching up their 50th black of the 2020 season at Fraser.

Mooloolaba GFC’s Jamie, Michael and Mitchell Behrens trailered their boat Takkachee, a 218 Sailfish for the weekend and made the most of the trip with a 6-2-1 Saturday and a 10-8-4 Sunday. Also from MGFC on Robbie Flynn’s Luna the boys were 2 from 6 on Saturday with Sunday 0 from 2 blue marlin on the way home.  [Meanwhile back on home grounds other club boats got in on a bit of local action. Jamie reports that Makaira II and Roll the Dice tagged a black each while Catalyst tagged a striped marlin!]

After a radio mishap meant a return to port on Saturday, Shane Hall fished his trailer boat X-chaser out of Bundy Sunday for a 6-4-4 in a ripper 4 hour session. Shane says they even caught dinner on the way home with a nice feed of reefies from the gutters! 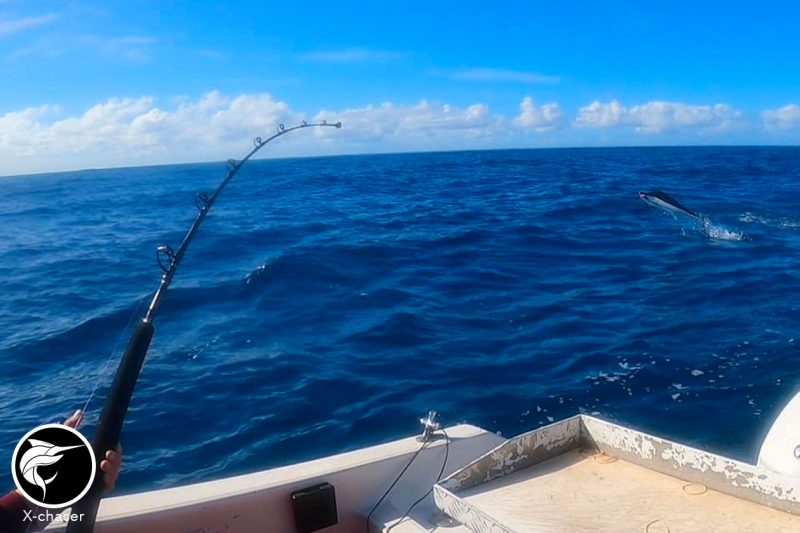 For most the conversions were not awesome as the fish weren’t quite as much on the chew as they had been previously on the moon but there are still plenty of fish around.

While the weather has likewise not been cooperating reports of the little blacks off Cairns are starting to come through more regularly. The Sims family on Bounty Hunter have reported marlin bites on their last few trips. Joshua Flower also reported his first black of the new season this week in his boat after his sons both caught their first black each back in June.

As reported Capt. Simon Carosi with owner Marcus and son Murdoch enjoyed a couple of weeks for the holidays on the beautiful 60 Norman Wright Aura and ended up their trip with an awesome 6 from 9 black marlin on Friday 3rd.

These are level up (year older) fish from the ones being caught at Fraser. Simon said in the 70/90kg range and a lot of fun at that size too!

Peak Sport Fishing’s Capt. Eddie Lawler also picking away at the blacks on the west side as well as plenty of reefies for dinner and gamefish dollies and mackerl in the mix. Again these are the larger model of fish.  Capt. Josh Bruynzeel’s On Strike (and Capt. Ash Emery) likewise, putting guests onto school holiday fun with the blacks and a mixed bag of reef and gamefish.