It’s always exciting and interesting when you receive news of a recaptured fish that was previously tagged and that happened yesterday when The Chapel reported back a sailfish they caught that was already tagged. With the original tag number TGFC was able to find the corresponding tag card in their database quickly and discovered the fish was tagged by another TGFC member and boat 3 years and 5 days earlier in a similar area. Original angler was Shane Flynn on board Reel Crazy.

In 2017 the fish was first caught at an estimated 10kg by Reel Crazy, when released again Monday The Chapel estimated the sailfish was now 40kg. It’s great to see tag and release techniques providing results and proving healthy and sustainable for fish stocks. Well done teams!

NB: Pic is of The Chapel crew removing the original tag before releasing the fish quickly and healthy. 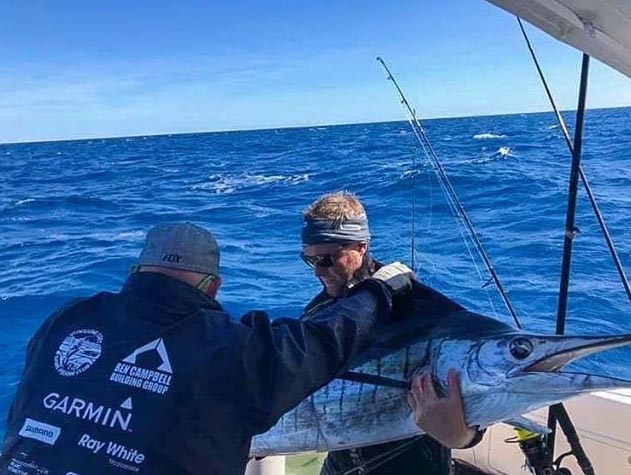 Over the weekend 7 club boats pre-fished the grounds before the Billfish Challenge that starts this week – and there were 25 fish tagged (only 2 of which were sailfish, the rest were all black marlin under 15kg).

The juniors were again among the action again with Will Travers (8yo) tagging 2 marlin and Jordyn Beetham (7yo) tagging a marlin, both on Bee Haven who went 5-4-3 on Sunday. Other boats that found several fish were Zuri who went 6-5-5 (1 sail, 4 marlin) on Saturday. And Incognito who went 6-5-4 (1 sail, 3 marlin) Saturday and 1-1-1 Sunday.

Other club boats Shindig, Our Jobsite, Relapse and The Chapel all found and tagged a couple of fish as well.

And Damien Savis, Nelson Tilley and John Kratzman were 3-3-2 on Vixen by 0930am on Saturday before the weather chased them home as previously reported on socials!

Fingers crossed this keeps up for the Billfish Challenge in a couple of days. As of today we have 25 boats registered. I’ll be keeping you posted.