No fish photos today partially due to the fact that I had trouble combining standing up with holding a camera upright, but also due to the fact that we didn’t catch any! I did watch Mistress backing down on a very nice fish next to us and it did a couple of good jumps before I could get the camera out. The fish  also ended up being the only big fish on a slower days fishing on the reef estimated at 900lbs tagged for angler Jeff just before 5pm. 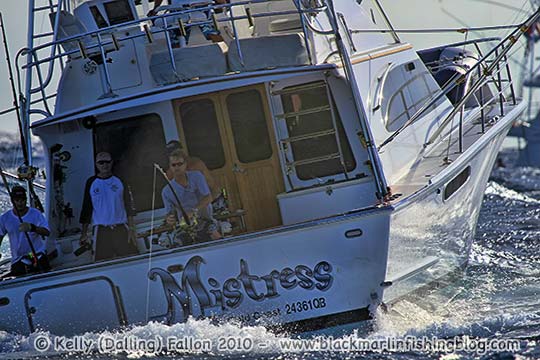 8 fish were added to the scoreboard on Day 3.  Capt. Dan on Little Audrey made the decision to head south from his overnight anchorage up the top and try Number 4 Ribbon Reef where he had some luck last week. It paid off for him tagging the first fish of the day for angler Mike Hudson at 100lbs.  This was enough to score them the daily award.  Also at Number 4, Hard To Swallow with the Cresta team on board released their first fish of the competition at 150lbs for Adrian Ballintine.

Capt. Adam on Iona 2 was another keen to return to more comfortable surrounds (or to get away from the congestion on Number 10) as he fished his regular haunt the ‘Bus Stop’ at Linden Bank and had chances early jumping a fish off within minutes of start fishing before eventually keeping the hooks in another small fish on the last sked for Dale.

On the leaderboard, Viking II added a 150lb-er for angler Richard to put them one fish clear on 5 tags. And, Top Shot also added a 300lb-er for regular Japanese angler Tomonori Omi to put them into outright third.  Sue Ahlers on board Iona with Capt. Trent also released a 300lb-er to put her in the hunt for champion female anger and Rat Bag also released a 150lb-er early for angler Brendon.

Outside the tournament but also on Number 4 Ribbon and providing some much needed radio relay for boats fishing to the south, Capt. Tim on Tradition had the top day of reported releasing two to finish his trip with 6 in 6 days.

Viking II leads with 5 tags from KEKOA with 4 and Top Shot with 3. Calypso, Jag, Little Audrey, Iona and Mistress are on 2 tags and Ikey Moe, Castille III, Game Over, Maitai, On Site, Hattitude, In The Black, Rat Bag, Hard to Swallow and Iona 2 are all on one.