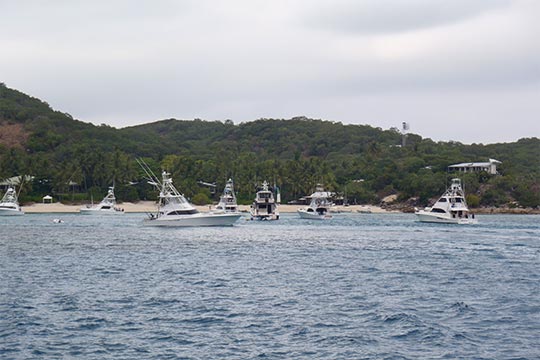 There are just 4 minutes in it between the first and second place boats after Day 1 with both Capt. Chris “Sharky” Miles’ Kanahoee and Capt. Chris Jolly’s Amokura both tagging two black marlin–Amokura just pipping Kanahoee for the second tag to take out the daily prize. (Sailpast photo from Capt. Tim on Tradition – thanks Tim!)

It was a big fish start with an 850lb-ler for lady angler Amanda Thompson on board Kanahoee at lunchtime and the fish continued to trickle in after. Not a hot bite by any means but showing signs of improvement over the fishing over the last few days perhaps.  Other boats with one fish on Day 1 were the Lizard Island boat Fascination, Reely Black, Bill Collector and Viking II, in that order and all smaller fish.  8 tags total for Day 1.  Many other boats also raised fish including a couple of missed chances on board Calypso. Capt. Tim Dean tells me they had two on for the day and fought them both for a while but unfortunately lost both fish at boat one with the leader in hand! Not a point scoring day for the tournament but still great action for the guys from the USA, Bob and Craig who are staying out of the lodge. Craig who fought his biggest (first) black yesterday at around 600lb and got to watch the hook fall out at the boat!

If you enjoyed the Live Blog from yesterday, stay tuned because we’ll be doing it all again today.  Good luck to everyone competing! 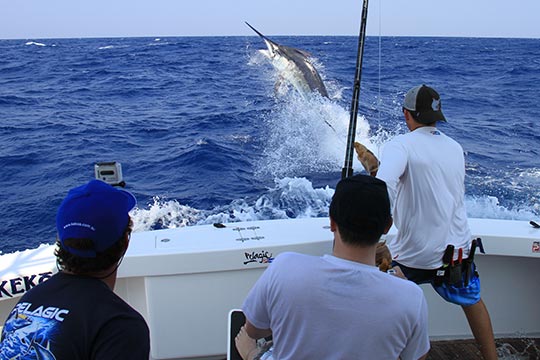 300lb-er for Roger on KEKOA

Outside the tournament (where every boat was fishing Number 10 Ribbon or north), there were a couple of fish in the middle Ribbons as well. Capt. Hayden Bell on Release got a nice one on Number 5 and on KEKOA we released this 300lb-er for Roger who, with Andy and Heinz, is fishing with us for these 8 days (but has elected not to fish the tournament). This was Roger’s first black marlin and as a fly angler, he’s used to much smaller species so it gave him a bit of a tough time, but for the rest of us gave a spectacular arial display and plenty of photo ops. 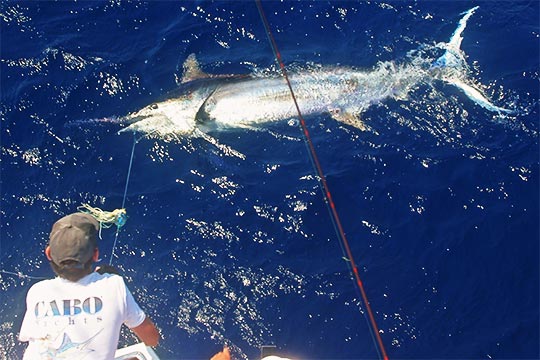 On the FB page yesterday I mentioned the success of Townsville Game Fishing Club boat Zuri out at Myrmidon Reef.  Donna Nicolosi sent me this photo of their black marlin beside the boat. On the wire was 16 year-old Jack Nicolosi, and 14 year-old Alex Nicolosi the angler on stand up!  What a great effort for the youngsters!  Donna said that conditions on Saturday morning were good and they were hooked up by 10am, 30 minutes later they had a tag in it.  Other Townsville GFC boats also ventured out including Mojo, Princess C, Annie B and Reel Crazy. Mark Parkes’ Mojo had an encounter with an estimated 500lb fish for Ben Mathieson on Friday afternoon but dropped it after a 30 minute fight.  There were also plenty of schools of big yellowfin in the area–this is just the start of the Myrmidon season off Townsville.