The big ones keep coming 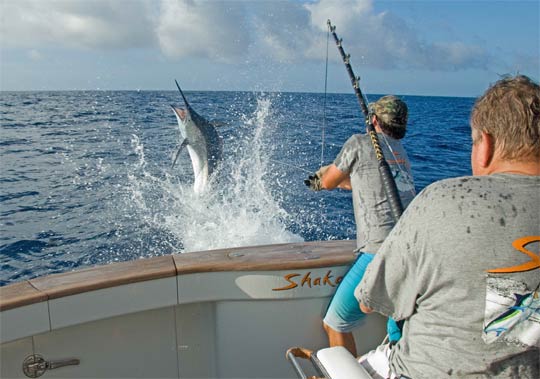 On the bank, Capt. Jared Weir and team on Shaka had their fish attracting mojo going yesterday catching fish–including big fish–while the rest of us watched. They finished the day with 5 from 9 including one that Capt. Jared put at well over the mark, as well as one other nice one.  Unfortunately the big fish didn’t jump so no photos but this great shot of one of the smaller fish.

Nearby, we were hassled by the smaller male fish trying to pounce on the big bait. Then, just moments before lines in, pounce one did. Right on our favourite and popular teaser concoction which disappeared into the blue tube. Gone! (We called our teaser Sammi – it was a Mud Flap teaser with a Larva Lure teaser head and has raised many a fish.  Goodbye Sammi, we’ll miss you! RIP scuba seal!)  Likewise Capt. Tim Richardson on Tradition had a couple of bites and ended up with a 300lb mako late in the day.

Further to the south, Capt. Tim Dean on Calypso, raised the biggest fish he’s seen in years which missed two baits then sadly disappeared.  He ended with two from five around 250-300. And, Capt. Chris Jolly on Amokura who fished nearby Tim reports two from four in the last two days of fishing at 200 and 500lbs.

And further to the south, Little Audrey are continuing their good run with another two from three at 150 and 350lbs.  Capt. Dan said they also missed one about the 600lbs mark.  And Capt. Ian “Wobbles” Ford Hot Shot returned to Port from their final Cairns trip of 2011. Dave says that while they weren’t primarily marlin fishing they still managed to release a couple and had great fun with the dogtooth tuna jigging program. They went 2 from 4 blue marlin and also raised a 900lb black while doggie fishing and caught a 500black on the doggie gear too!

If you’re on Facebook you will have seen the midday update yesterday from Rhino and Mustard who are taking Iona 2 home to Newcastle/Port Stephens.  From 3pm Wednesday to lunchtime yesterday fishing off Fraser Island, they were at 5 from 10 (4 blue marlin and a stripe – and it was actually 5 from 9), including a double header of blues on Thursday morning (Rhino said he woke up to both reels screaming!) What a great effort considering there was only the two of them on board.  In true Rhino fashion, he’s already made the video, you can check it out here. The two boys having fun! (I particularly like the part where the boys on the double header, casually cross over from covering board to covering board!)

Over in Weipa, Notso and fellow guide Owey spent the day on the water in search of billies on fly and ended up 1 from 2.  As a guide, Owey is used to putting his clients onto the fish and had never caught a billfish as an angler before. Not bad when your very first billfish is on fly!