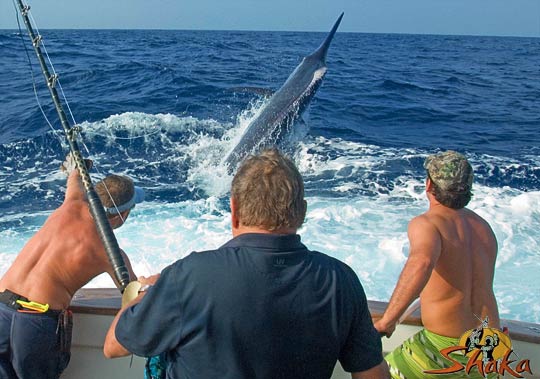 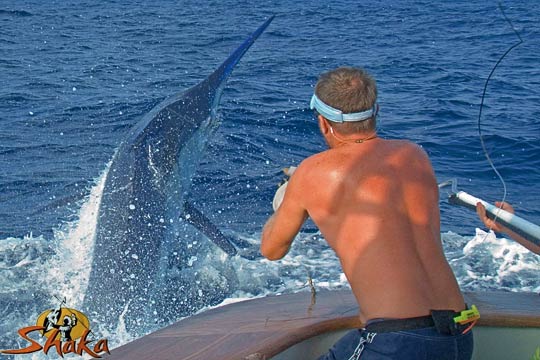 Capt. Jared Weir on Shaka, well what can I say, if your only bite of the day (they stopped fishing after) is a grander black marlin, or 1100lbs, you’re having a great day!! (I should have the exact size soon. Update: It was 1097lbs.) Chris Morris was the angler–who also caught all five on Thursday. Well done Chris, what a top effort to all on board!! 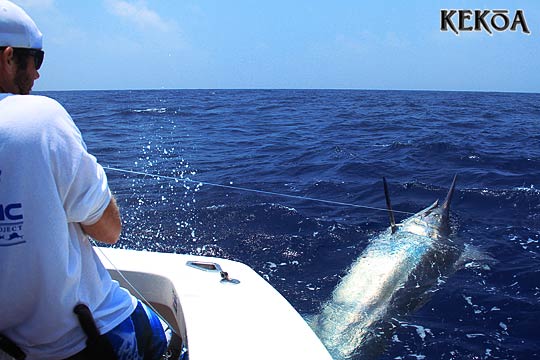 Likewise, on KEKOA, we had a great day start to our day. Our first bite was a triple header and we watched them go bang…scad, bang…stinger, bang…big bait. The stinger promptly fell off but we were hooked to two fish, a big and small. Since Scott was on strike he decided to do both of them quickly bringing the smaller fish to the boat first so that we could go and chase the larger. 45 minutes minutes later, with only one series of big jumps, she was beside the boat and released and Capt. Luke put her at over 1000lbs! Two down for Scott and Ian was in the chair next for his very first marlin–which gave him a tough time (as did the heckler behind)–before giving us another great arial display on the leader. Three from several as after that we were hassled by the smaller males again and pulled the hooks on one more at the back of the boat. (I have photo envy today, no real good photos of our big fish :-( ) 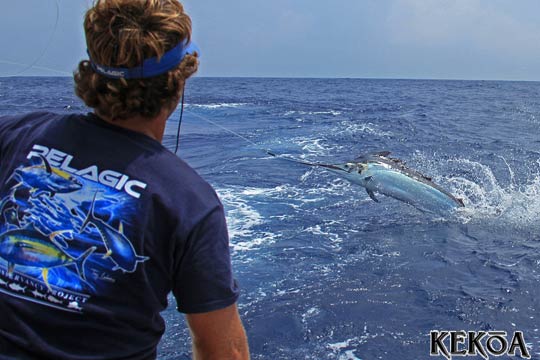 Capt. Tim Dean on Calypso also had a top day finishing with three from three including one nice solid fish that he put at 850lbs.

Capt. Damien Collette on Saltaire also fished Linden Bank on a day trip out of Cairns and released a 900lb-er at Spur Reef just before home time. Damien’s 16 year old son Jake was on the leader for his first big fish wire! Congrats to all!

Capt. Tim Richardson on Tradition also released two from three also before heading into Cairns for changeover. Likewise, Capt. Daniel Carlson on Little Audrey finished up their trip yesterday with zero’s but still 7 for the 5 days fishing including three over a grand! And Capt. Bobby Jones on Iceman fought a big fish for 2.5 hours late in the day before unfortunately she was lost.

Back on the Gold Coast, Capt. Brent James now at the helm of the Mauna Kea released a blue marlin approximately 250lbs on his first day’s charter. The fish was successfully switch baited onto 50lb tackle. Also Vince on private boat Barco tells me they also released a blue, it was a long day to find it, but find it they did!