White blue marlin, Exmouth and marlin in a thundercat! 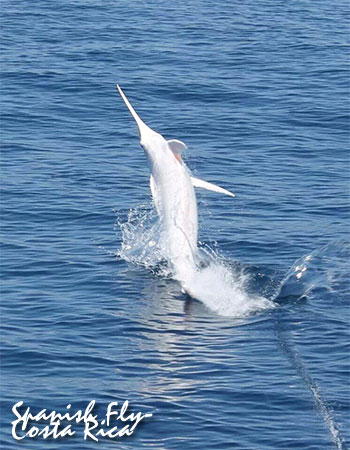 This estimated 300lb albino blue marlin was caught Wednesday off Costa Rica on the Spanish Fly. What a sight!

Although according to the IGFA, the eye color – black, rather than red or pink – indicates that this marlin is leucistic (which is a reduction in pigmentation) rather than albino.

Three days of hot fishing out of Exmouth for the 2014 Australian International Billfish International (AIBT) wound up Wednesday. And what an event!

The final report and list of ‘winners and grinners’ hasn’t been released yet – and I think it was a pretty tight race – so we’ll look forward to reading that soon. In the meantime, many of the teams have a quick turnover for Gamex which starts with festivities at the clubhouse from today, and fishing from Sunday.

Marlin from an Inflatable Thundercat

Port Hacking GFC mates Tim Heather and Matt Shine set off from Kurnell early Sunday morning the 9th March in a 10 foot inflatable Thundercat with the goal of a marlin from the inflatable. Crazy kids!

Several hours later they were hooked up and fighting (on an egg beater with 24 kg line seated on an esky no less!) 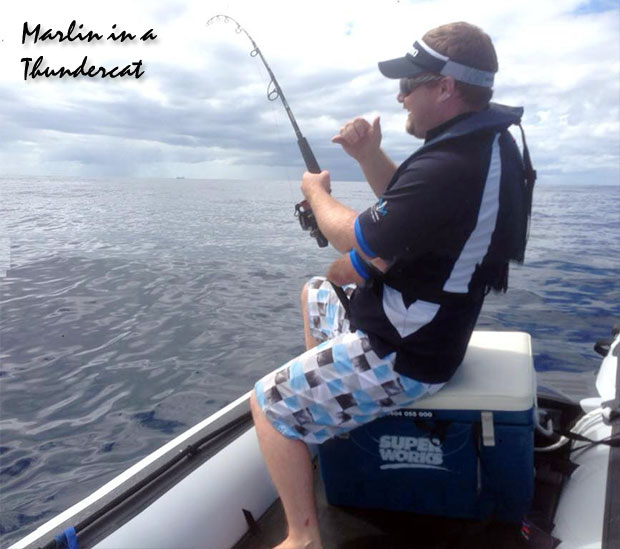 The boys had previously spent a great couple of weekends in Port Stephens for the 2014 Interclub Tournament but hadn’t completely scratched the itch. With the weather and SST charts looking favourable, Sunday was the day. Although the ‘fragility’ of the thundercat might not seem a great path to some, the boys felt their experience and knowledge of game fishing would see them through if they did hook something large and feisty.

They started trolling around 7 am and had a hook up by 10.30am on a new Zacatak lure only purchased the weekend prior in Port Stephens. Caution dictated the fight as the boys did not want a frisky an encounter close to the rubber sided vessel. As they gained line, they had to be sure they wouldn’t end up in strife as the marlin was only a few feet shorter than the boat.