What a time to lose internet!

Sorry all but its been completely out overnight (so much so I’m not even sure if my last tweets went out?) so just a quick catch up now as we are already on our way fishing.

At cease fishing on the last day of the Lizard Island Classic for 2016 Capt. Corey Hard’s Askari was hooked up. But it wouldn’t have been quite enough even if it was the correct species (it wasn’t) to catch leader Capt. Bobby Jones on Iceman, a very deserving winner for his first Champion trophy at Lizard!

It was a late start to the day but when the bite started, there was quite a bit of activity in a short period of time. Wild Turkey started things out with a 350 and added a 250 later in the day which was enough to give them the daily. Askari added another for James which gave him the Champion Male Angler’s gong. Zulu tagged one for Steve, and Graham tagged one on Onsite and Kaizen tagged one for Parke nearby.

Down on Number 7, Daniel Klein’s team on Cookie were making a late charge with another nice fish that they put at 700lbs and followed up with a 450 and hour later which put them into overall third.

One KEKOA, we were watching Tominori Omi on Top Shot fighting his 200lber tagged when we had the bite with this fish that Luke put at 700lbs (below) for Brian.

And a 250lb-er to Michael on Reel Easy as well as a 150lb-er to Mark Jones on Topless 15 minutes before cease fishing rounded out the 12 tags for the shorter day 7.

Photo at top of The Outlaw’s fish from earlier in the week that they put at 850lbs for Andrew Stubbs.

Full list of winners and grinners tomorrow as well as some photos of festivities when I have better internet! 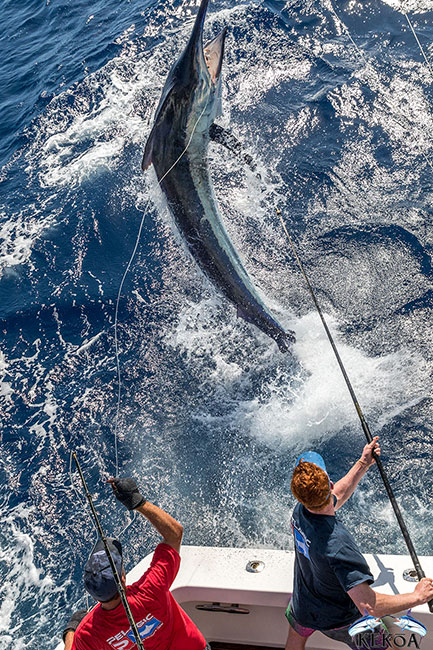