Another early season grander in Cairns

Updated: Updated again for Capt. Daniel Klein’s Onsite who was into Cooktown overnight with 1 from 3 yesterday adding to his previous catches to make 9 in 5 days for the boys, Robbie, Bob and Adam Dankert from Sydney GFC. Capt. Haydon Bell’s Kanahoee was also back into Cooktown on changeover yesterday after 6 days up the top end. Haydon tells me they released 11 fish to 450 or so pounds (mid-rangers) with son Bodie getting his chance to leader several. Photos from Mike Tarmey on board added in below!  And Capt. Tim Richardson’s Tradition is also fishing up the Ribbons and got on the board yesterday with a 300lb-er at Number 7 for 13 year old Thomas. Tim says they have been enjoying lots of snorkeling and light tackle and a few hours in the afternoon on the outside each day.

Those who read the blog a lot will know that Ralph fishes up here regularly. In fact he was a member of the winning team with Sharky at the Cairns Bluewater Billfish Comp at the end of August.  My first mention of Raph fishing up here was back in 2009 on his own boat Spartacus during the Lizard Island tournament, but I suspect he’s been fishing up here a fair bit longer than that!

Congrats Ralph on the milestone! And congrats to team on Levante. Sharky tells me they have been fishing steady and this was the third marlin in three days so far on this trip. Although he hadn’t yet seen one over 300lbs, he’s certainly done that now!

More photos to come later (above a bit blurry courtesy of the poor internet!)

And Capt. Ross Finlayson on Top Shot is also back out after changeover in Cooktown finishing up his fly fishing trip with regular Ishii-san with a 155lber.  Ross says they are into heavy tackle now from here on in. Reports from the northern end are consistent fishing which should only get better as we move into October.

A few more of the local private boats have also been getting in on the action both heavy and light tackle.  On the light, Peter Graham tells me that Jo and  Ray Liskus  on Tagzin went 2-1-1 on the wide grounds on Sunday. Peter says the fish was 20kg, and a second (about 100kg) tried to eat the witch doctor but wasn’t interested in anything else. The bite was at the top of the tide. It was a first marlin for Jo – congrats Jo!

And following up also on light tackle Capt. Luke Fallon’s KEKOA also added another 2 fish on Sunday morning to make it 10 black marlin for the weekend. A great way to see off the light tackle for 2017!

Get your order in by Friday (as I’ll be at sea and unable to post after that!). We are running low on some sizes (only 3 size S left) so get in fast.

Andrew Tivey sent me a pic of his shirt in action on Linden Bank on the weekend on Hook In. Thanks Andrew.  Looks bloody good if I do say so! 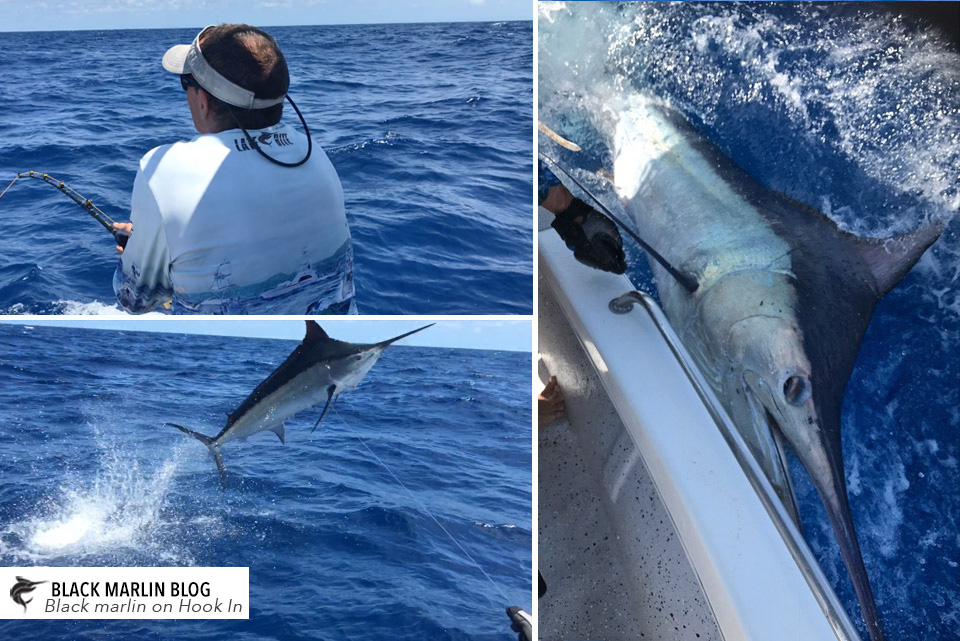